Why does a JPEG still look good, even though it is compressed at least 4:1 (25% of data left)?

Therefore, a compression algorithm, such as JPEG, can throw away 75% of the image color gradations as long as the brightness is not affected, and we won’t see the difference. 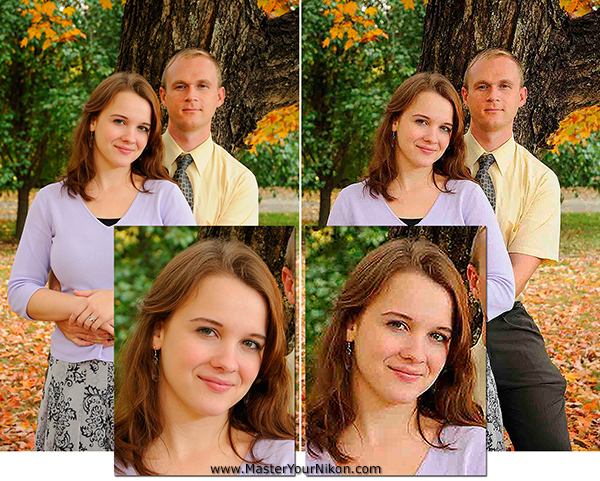 As a test, I took a nice JPEG image and resaved it several times (figure 1). The original is on the left (one save) and the resaved version is on the right (multiple saves). Often one cannot clearly see the changes in a JPEG file until it gets to ridiculous levels like this. The image simply looks bad for some reason that you can’t put your finger on. The picture on the right is the result of saving too many times and the resulting resharpening and compression losses.

Postprocessing an image should not be done with a JPEG file. The JPEG conversion is the last step in postprocessing. You postprocess a NEF (RAW) file and when you have it just right, save the NEF first, then convert it to JPG for image use. When you save a NEF file, with changes, it does not affect the image data within the file in any way. It affects only the settings markers that are saved separately from the image data (white balance, Picture Control, color space, Active D-Lighting settings, etc.). You can save a NEF file 10,000 times and never change the actual image data. On the other hand, a JPEG is a final product, not meant to be touched again. Do not modify and resave a JPEG. If you didn’t get it right the first time, shoot it again. If you absolutely have no way to reshoot the JPEG and must postprocess it, do not postprocess it as a JPEG. Convert it to a TIFF file first. A TIFF file is not lossy (has no compression, which is one reason they are so big), therefore, you can save and resave a TIFF file over and over without recompressing the file and damaging it. When you are done postprocessing the TIFF file, resave it as a final JPEG. The bottom line is simple: A JPEG is done, period. Do not change it. Every resave of a JPEG recompresses the image 4:1 minimum (only 25% of original data is left over). It kills image quality. After about two resaves, there is little data left, banding in color gradations, and compression artifacts galore. No resaves for JPEGS! (Have I said that enough yet?)

The moral of the story … Don’t resave JPEG files!