Nikon’s Picture Control system—found under the Set Picture Control setting on the Shooting Menu—lets you control how your image appears in several ways. Each control has a specific effect on the image’s appearance. If you’ve ever shot film, you know that there are distinct looks to each film type. No two films produce color that looks the same.

In today’s digital photography world, Picture Controls give you the ability to impart a specific look to your images. You can use Picture Controls as they are provided from the factory, or you can fine tune Sharpening, Contrast, Brightness, Saturation, and Hue.

The cool thing about Picture Controls is that they are shareable. If you tweak a Nikon Picture Control and save it under a name of your choice, you can then share your control with others. Compatible cameras, software, and other devices can use these controls to maintain the look you want from the time you press the Shutter-release button until you print the picture with a program like Nikon Capture NX2.

Here are the Shooting Menu screens used to choose a Picture Control:

You can also modify the currently highlighted control by scrolling to the right before you press the OK button (figure 1, images 2 & 3). This will bring you to the fine-tuning screen. You can adjust the Sharpening, Contrast, Brightness, Saturation, and Hue settings by scrolling up or down to select a line and then scrolling right or left (+/-) to change the value of that line item. This is entirely optional.

In figure 2, you can see the same picture processed under each of the Nikon Picture Controls. To jog your memory, here is a list of the controls: 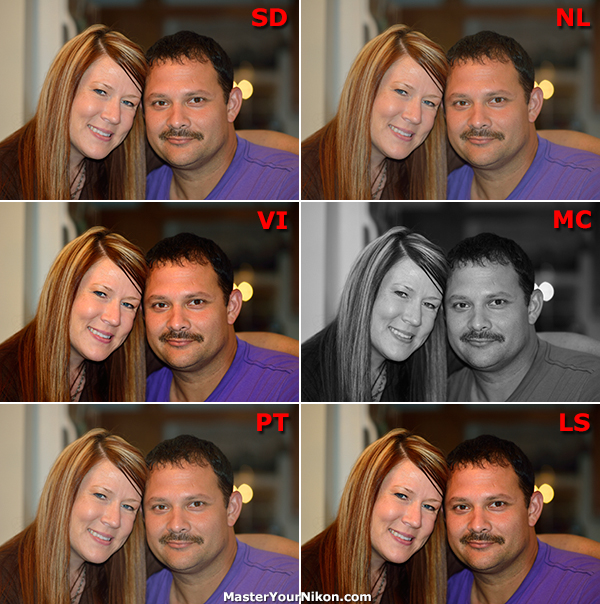 The following is an overview of what Nikon says about Picture Controls and what I see in images I’ve taken with the various controls enabled.

This is Nikon’s recommendation for getting “balanced” results. They recommend SD for most general situations. Use this if you want a balanced image and don’t want to post-process it. It has what Nikon calls “standard image processing.” The SD control provides what I would call medium saturation, with darker shadows to add contrast. If I were shooting JPEG images in a studio or during an event, I would seriously consider using the SD control. I would compare this setting to Fuji Provia or Kodak Kodachrome 64 slide films.

This is best for an image that will be extensively post-processed in a computer. It, too, is a balanced image setting, but it applies minimal camera processing so you’ll have room to do more with the image during post-processing. The NL has less saturation and weaker shadows, so the image will be less contrasty. The effects of the NL and SD controls are harder to see since there’s not a marked difference. However, the NL control will give you a little extra dynamic range in each image due to more open shadows and slightly less saturated colors. If you’ve ever shot with Fuji NPS film or Kodak Portra negative films and liked them, you’ll like this control.

This is for those of us who love Fuji Velvia slide film! This setting places emphasis on saturating primary colors for intense imagery. The contrast is higher for striking shadow contrast, and the sharpness is higher, too. If you are shooting JPEGs and want to imitate a saturated transparency film like Velvia, this mode is for you! Plus, the greens and blues are extra strong. That means your nature shots will look saturated and contrasty. Be careful when you are shooting on a high-contrast day, such as in direct sunshine in the summer. If you use the VI control under these conditions, you may find that your images are too high in contrast. It may be better to back off to the SD or NL control when shooting in bright sunshine. You’ll need to experiment with this to see what I mean. On a cloudy or foggy low-contrast day, when the shadows are weak, you may find that the VI control adds a pleasing saturation and contrast to the image.

This allows the black-and-white lovers among us to shoot in toned black-and-white. The MC control basically removes the color by desaturation. It’s still an RGB color image, but the colors have become levels of gray. It does not look the same as black-and-white film, in my opinion. The blacks are not as deep, and the whites are a little muddy. To me, it seems that the MC control is fairly low contrast, and that’s where the problem lies. Good black-and-white images should have bright whites and deep blacks. To get images like that from a digital camera, you’ll have to manually work with the image in a graphics program like Photoshop. However, if you want to experiment with black-and-white photography, this gives you a good starting point. There are two extra settings in the MC control that allow you to experiment with Filter effects and Toning. The MC control creates a look that is somewhat like Kodak Plus-X Pan negative film, with blacks that are not as deep.

The MC Picture Control has some added features that are enjoyable for those who love black-and-white photography. There are Filter effects that simulate the effect of Y (yellow), O (orange), R (red), and G (green) filters on a monochrome image. Yellow, orange, and red (Y, O, R) change the contrast of the sky in black-and-white images. Green (G) is often used in black-and-white portrait work to change the appearance of skin tones. You don’t have to go buy filters for your lenses; they’re included free in your Nikon.

Additionally, there are 10 variable Toning effects:  B&W (standard black-and-white), Sepia, Cyanotype, Red, Yellow, Green, Blue Green, Blue, Purple Blue, and Red Purple. Each of the Toning effects is variable within itself—you can adjust the saturation of the individual tones. You can shoot a basic black-and-white image, use filters to change how colors appear, or tone the image in experimental ways. Can you see the potential for a lot of fun with these tones?

This is a control that “lends a natural texture and rounded feel to the skin of portrait subjects” (Nikon’s description). I’ve taken numerous images with the PT control and shot the same images with the NL control. The results are very similar. I’m sure that Nikon has included some software enhancements specifically for skin tones in this control, so I’d use this control for portraits of people. The results from the PT control look a bit like smooth Kodak Portra or Fuji NPS negative film.

This is a control that “produces vibrant landscape and cityscapes,” according to Nikon. That sounds like the VI control to me. I shot a series of images using both the LS and VI controls and got similar results. Compared to the VI control, the LS control seemed to have slightly less saturation in the reds and a tiny bit more saturation in the greens. The blues stayed about the same. It seems that Nikon has created the LS control to be similar to, but not quite as drastic as, the VI control. In my test images, the LS control created smoother transitions in color. However, there was so little difference between the two controls that you’d have to compare the images side by side to notice. Maybe this control is meant to be more natural than the super-saturated VI control. It will certainly improve the look of your landscape images. The look of this control is somewhere between Fuji Provia and Velvia. You get great saturation and contrast, with emphasis on the greens in natural settings.

When you start missing the “good old film days” just keep in mind that Nikon has not forgotten us digital shooters. With Picture Controls, you can imitate favorite films of yesteryear or even invent your own color schemes with a modified Nikon or Custom Picture Control. Experiment with Picture Controls until you are comfortable with them and can choose the right one for each shooting session.

To help you understand Nikon Picture Controls even better, please download and read the following 13-page PDF document from Nikon:

Note: When you click the link above, it takes a few minutes to download the document, during which time it will seems as if nothing is happening. Just be patient and the PDF file will appear. You’ll need Adobe Reader, which you can download for free from www.Adobe.com, to open the file. This document describes Picture Controls—with lots of pictures—to help you see the range of control you can achieve. I really enjoyed reading it because it explains Nikon Picture Controls well and even mentions software that will work with them.